The Staffordshire Hilton: There’s the Trub

A post today that was supposed to go up yesterday, but I was having such a bad day I pretty much gave up, so apologies to Stuart Cowley and Tony Kulik for neglecting this post with more rumination on the fascinating subject of Hilton Hall.

Stuart now works at a company in the grounds of Hilton Hall, and has previously explored this often-overlooked but fascinating place in this article dealing with the restoration and history of the family who owned it. In this followup, Stuart finds that the Portobello Tower at the hall was the work of a rather important architect…

Stuart is of course, he lovely chap who wrote beautifully about his childhood at Chasewater, local marching band culture and history, his involvement in the golden days of local radio and he also shared a wonderful local history book for Chasetown.

Following Stuart’s article, long term reader and friend of the blog Tony Kulik got in touch with a lovely gallery of photos from Hilton Hall which I feature at the top of this post.

It turns out Tony remembers the Orangery derelict:

The glass domed building was the ‘orangery’ – it was derelict when we were kids in the 60’s and camped there with the scouts – it had an raised slab in the centre that the druids used as a sacrificial altar (or so we told to frighten us to death as we camped just 20 yards away from it in woods that have now been cleared).

Thanks to both lads for lighting up a lovely bit of local history I for one was never more than peripherally aware of the existence of.

The last article proved surprisingly popular, and if you have anything to add, please feel free: comment here or mail in – BrownhillsBob at Googlemail dot com. Cheers. 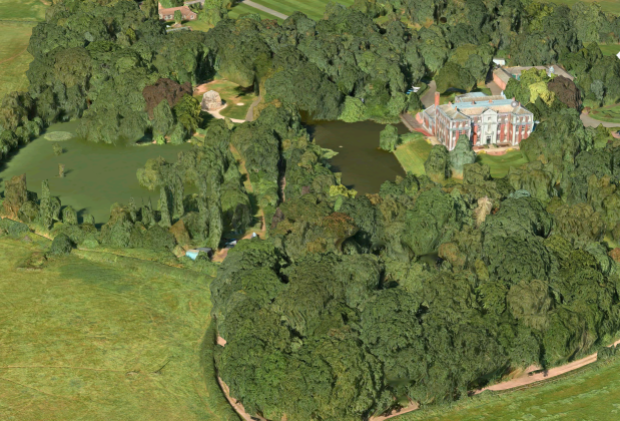 Hilton Hall as depicted on Apple Maps. Note the folly on the left. Click for a larger version.

You may remember the other week me mentioning a tower in the grounds of Hilton Hall Essington, picture below:

This description from the Staffspastrack site has got me digging for more information and as usual created more questions than answers:

Description:The Portobello Tower is a hexagonal, embattled tower built to commemorate Admiral Vernon’s capture of Portobello in 1739. It was perhaps designed by Rochard Trubshaw of Little Haywood and built between 1739 and 1765.

Hilton Park passed to the Vernon family in 1547. The present hall was built for Henry Vernon in the early 18th century. The Vernons sold the hall around 1951 and for a while it was owned by a Catholic Order of Nuns. The Hall was the head office of Tarmac between 1985 and 1999.

I was curious to find out more about Richard Trubshaw (above has him as Rochard, I think that may be an error) with him being a relatively local chap from Little Haywood so started a search on the net.

Turns out that the Trubshaw family over the generations have helped to provide this area and beyond with some of our well known landmarks. I don’t know how this has passed me by until now.

This from the Oxford index:

English family of architects, master builders and engineers. At least 18 members of this family are recorded as architects or civil engineers, from Thomas Trubshaw, who built the tower of Armitage Church, Staffs, in 1632, to Wolstan Vyvyan Trubshaw, ARIBA (1893–1981). The family was associated with Staffordshire, of which James Trubshaw (1746–1808) and his grandson Charles (1811–62) were both County Surveyors. The first to be of any importance as an architect was Richard

There is so much information on the net that I can’t do the family justice in this piece alone so it is well worth delving for anyone interested but Richard also had a hand with the following:

St Bartholomew Norton In The Moors Stoke On Trent

Just as interesting is the information on James Trubshaw linking him with Colwich and Rugeley, again, I can’t improve on the information to be found on Wikipedia so here it is:

James Trubshawb (13 February 1777 – 28 October 1853) was an English builder, architect and civil engineer.[1][2]His civil engineering works include the construction of the Grosvenor Bridge in Chester, Cheshire, then the longest stone span. He also pioneered the technique of underexcavation with the straightening the leaning tower of St Chad’s in Wybunbury, Cheshire.

He was born to stonemason, builder and engineering contractor, James Trubshaw and his second wife Elizabeth (née Webb), at the Mount near Colwichin Staffordshire, the second son in a family of seven sons and two daughters.[1][2][3]He was educated in Rugeley, but left school aged only eleven to start work in his father’s business.[2]His earliest experience included working on buildings such as Sandon Hall, Fonthill Abbey, Buckingham Palace and Windsor Castle. In 1795, he worked on Wolseley Bridge near Colwich, and many of his early projects were bridges.[1][2]

On the death of his father in 1808, Trubshaw started a building business in Stone; an early commission was to build Ashcombe Hall.[2][4]He worked for a time in partnership with the Lichfield architect Thomas Johnson (1794–1865), who was to become his son-in-law.[5][6]In 1827, Trubshaw became a member of the Institution of Civil Engineers, and presented several papers there.[3][7]He later became the chief engineer of the Trent and Mersey Canal Company, and superintended the construction of reservoirs, feeders and railways for the company.[1]

Although he received only a limited education, he was a gifted practical engineer.[3]His obituary in The Gentleman’s Magazine described him as a man “of original genius, of great natural talent, and persevering energy … gifted with an instinctive perception of all great mechanical principles, uniformly guided by excellent common sense.”[1]

His best-known work is the construction of the Grosvenor Bridge over the River Deeat Chester, Cheshire (1827–33). Designed by Thomas Harrison, the project had been dismissed as impractical by prominent engineers of the time including Thomas Telford.[1][3]Its single stone span of 200 feet was considered the longest in the world when it was completed in 1833.[3][8][9]The Institution of Civil Engineers, to whom Trubshaw presented models of the bridge showing its method of construction, described his methods as having “excited the admiration of the Profession.”[1][3][7]Trubshaw himself said that he was “convinced the arch will be the largest and finest stone arch in Europe and will consequently be a lasting monument to the glory and superiority of Great Britain.”[10]

He also constructed many other bridges, including Exeter Bridge over the Derwentin Derby, Derbyshire (1850; now demolished).[1]

Trubshaw is also known for stabilising the leaning tower of the church of St Chad’s Church, Wybunbury, Cheshire, in 1832.[1][3][11]At that date, the 29.3 m tower inclined to the north east by 1.6 m, due to its location on sloping sandy soil with underlying saliferous beds, and it had tilted an average of 12 mm per year since 1790.[3]Trubshaw pioneered a method which involved no “wonderful machining or secret inventions” and was described in the Architectural Magazineof 1836:

“Mr Trubshaw, after examining well the outside of the foundations, commenced

digging down the inside. After having got below the level of the footings (lowest stones of the foundation), he proceeded to bore a row of auger-holes clear through under the foundations of the high side, the holes nearly touching each other. These holes he filled with water; and, corking them up with a piece of marl, let them rest for the night. In the morning, the water had softened the marl to a puddle; and the building gradually began to sink, another row of holes were bored, but, not exactly so far as the first row. They were filled with water as before; and the high side not only kept sinking, but the fracture in the centre kept gradually closing up. This process was

continued till the steeple became perfectly straight, and the fracture imperceptible.”[3]

This is the earliest documented application of the technique of underexcavation,[3]which has since been successfully used to stabilise the Metropolitan Cathedral of Mexico City(1993–98)[3][12]and the Leaning Tower of Pisa(1999–2001).[13]Trubshaw’s work accords with modern conservation principles as it was invisible, used the minimum intervention required and could be reversed or repeated if necessary. Despite the extreme instability of the ground, the straightened tower of St Chad’s stood without further intervention for over 150 years; it was restabilised using reinforced concrete foundations in 1989.[3]

Trubshaw was described as tall and athletic.[1]In 1801, he married Mary Bott of Stone; they had three sons and three daughters. Their eldest son, Thomas Trubshaw (1802–42), also became an architect; their eldest daughter married the architect Thomas Johnson, and their daughter Susanna was a poet and essayist.[1][2]The family settled in Little Haywoodnear Colwich in Staffordshire in 1809, and Trubshaw remained there until his death in 1853.[1]He is buried at Colwich, where the parish church contains a memorial to him

As mentioned, he worked for a while and then was related to a Thomas Johnson, a Lichfield architect. More on this gentleman can be found on the Lichfield Lore site here:

So that just covers some of the work of just two members of the Trubshaw family, what do we know about the rest of the family?

This entry was posted in News. Bookmark the permalink.

4 Responses to The Staffordshire Hilton: There’s the Trub

This site uses Akismet to reduce spam. Learn how your comment data is processed.